This week Louie Giglio announced that because of controversy surrounding a sermon on homosexuality he gave 20 years ago he would be withdrawing from the Presidential inauguration program. This, of course, has caused even more controversy. While I think he has been unfairly characterized as “homophobic,” I think there are a few things Christians need to keep in mind when we talk about this controversy.

I don’t know how we seem to be missing this. He was not asked to step down. He wasn’t forced to step down. It wasn’t announced without him even knowing it. He took the high road and tried to avoid further controversy by getting out of the way.

The official petition on whitehouse.gov to have Louie Giglio replaced only has 1,911 signatures at the time of this posting. I don’t watch TV news and get most of my news from Reddit, which admittedly has an extremely liberal bias. And I never heard about Louie Giglio giving the inaugural benediction. The response was not quite as large as you would believe.

You know how I know about it? Because of you. Because my Facebook and twitter have been filled with nothing but links to articles about how America hates Christians. The outrage about Louie Giglio withdrawing has been much more pronounced than the outrage about him speaking in the first place.

Think for a second how you would feel if an Imam was asked to pray? If it were an Imam you would use it to validate that Obama has an agenda against you. But imagine it were someone you thought was on your side, somebody who understood where you were coming from, and then they chose someone to pray that you felt hated by. Imagine it was Mitt Romney and he had asked a lesbian to do it.

Maybe not you personally, but the Christian community at large would lose it. You know how I know? They lost it over this. I’ve said before that a favorite past time of Christians is to pretend they’re persecuted. Think back to the “Ground Zero Mosque.” Remember how offended Christians were by that? Even if you weren’t, your brothers and sisters were. That is what Louie Giglio praying feels like to the LGBT community. Is it absurd to hate a stranger for a sermon he gave 20 years ago? Yes, absolutely. Is it unfounded to want to deny a Muslim community center be built two blocks away from a place that some extremists who called themselves Muslims committed an act of terrorism? Yes, absolutely. But people still do it.

There are worse things than homosexuality

Giglio gets something here we all need to learn from. There are bigger things than homosexuality and we need to focus on those. In his official announcement of his withdraw he said “it is likely that my participation, and the prayer I would offer, will be dwarfed by those seeking to make their agenda the focal point of the inauguration.” The controversy was not worth the damage to the message Giglio has been championing for years. Giglio’s work and the focus of his Passion conferences has increasingly been to end modern day slavery. 27 million human beings still don’t have a right to themselves because somebody else owns them. Giglio, as we all should, finds this abhorrent. The fact that there are slaves in a world where Christ has come to set the captive free should shame us as Christians. It seems Giglio did not want his name to be associated with this controversy, but rather wanted the primary message to be that slavery must end. It was this work that led Obama to ask him to pray in the first place.

Unfortunately, if you google the name Louie Giglio what you learn is that he gave a sermon deemed offensive and as such was “bullied” or “forced” out of the inaugural address. This is what most American Christians now know about Louie Giglio, not that he hates slavery. The way Christians in America came together to defend him is amazing. If only we could muster up such outrage for human trafficking. If only we cared about true injustice for others as much as we cared about perceived injustices for ourselves.

Christ said he came to set the captives free. He also said to take joy when people slander us. Instead of ignoring captives and complaining when we’re slandered, lets do what Christ taught.

Talk to Your Kids About God 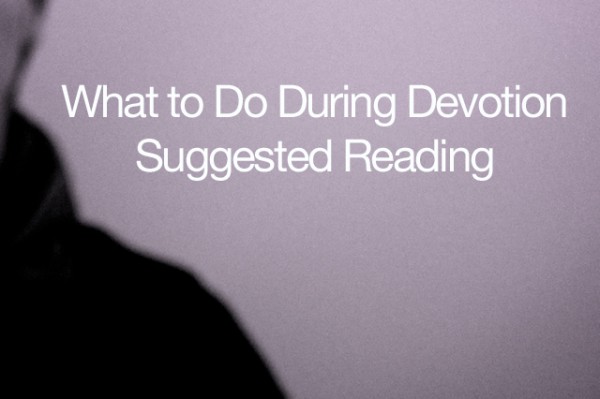 What to Do During Devotion Part 1, Suggested Reading

What Is Spiritual Formation?